Is Surface Laptop Cheaper/Faster than MacBook Pro [at first glance]?

I watched MicrosoftEDU event today and I had some thoughts. During the announcement, they claimed that it is faster than i7 MacBook Pro and has up-to 14.5 battery life. When they reveal the $999 price tag, everyone started applauding. It is indeed cheap for a premiere laptop. I am always been a MacBook user, and I am curious, is Surface Laptop a better choice now? I did a little bit research, and try to find out if it is cheaper and faster than MacBook Pro.

(this is not a review, it is just a simple comparison)

In order to compare the price, they should have similar configurations.

First, let’s take a look at CPU and GPU. Microsoft did not reveal the models on their website (just like Apple), so I searched online and found them on forbes. The i5 variant is i5-7200U and i7 variant is i7-7660U. I noticed that the Thermal Design Power (TDP) is 15W. When I purchased the MacBook Pro and chose between non touchbar version and touchbar version, I did research about it. Basically, TDP decides the average performance a processor can maintain for a long run (not peak performance). MacBook Pro non touchbar version possesses a CPU of 15W TDP, and 24W TDP for touchbar version. So I think I should compare surface laptop with MacBook Pro’s non touchbar variant. cpu-monkey has a benchmark comparison between i5-6360U (MacBook Pro non touchbar) and i5-7200U (Surface Laptop i5) and the difference I perceive is i5-7200U is slightly faster than i5-6360 (less than 5%). But for GPU, it is another story: Here I found the benchmark of both Intel HD 620 (Surface Laptop i5) and Intel Iris 540 (MacBook Pro non touchbar), where Iris 540 is more than 50% faster than HD 620, which means Surface Laptop’s graphic card is noticeable worse. In addition, even 2016 MacBook Air 13-inch’s graphic card is around 30% faster.

Then then operating system. Surface Laptop is shipped with Windows 10S, which designed to be power efficient, but at the same time, it can only run Windows Store Apps. For many users I think in order to use the software they are already familiar with, such as Photoshop or play games on Steam, Windows 10 Pro seems to be the only solution right now (extra $50). But I am not sure if 14.5 hours battery still works for Windows 10 Pro or not. 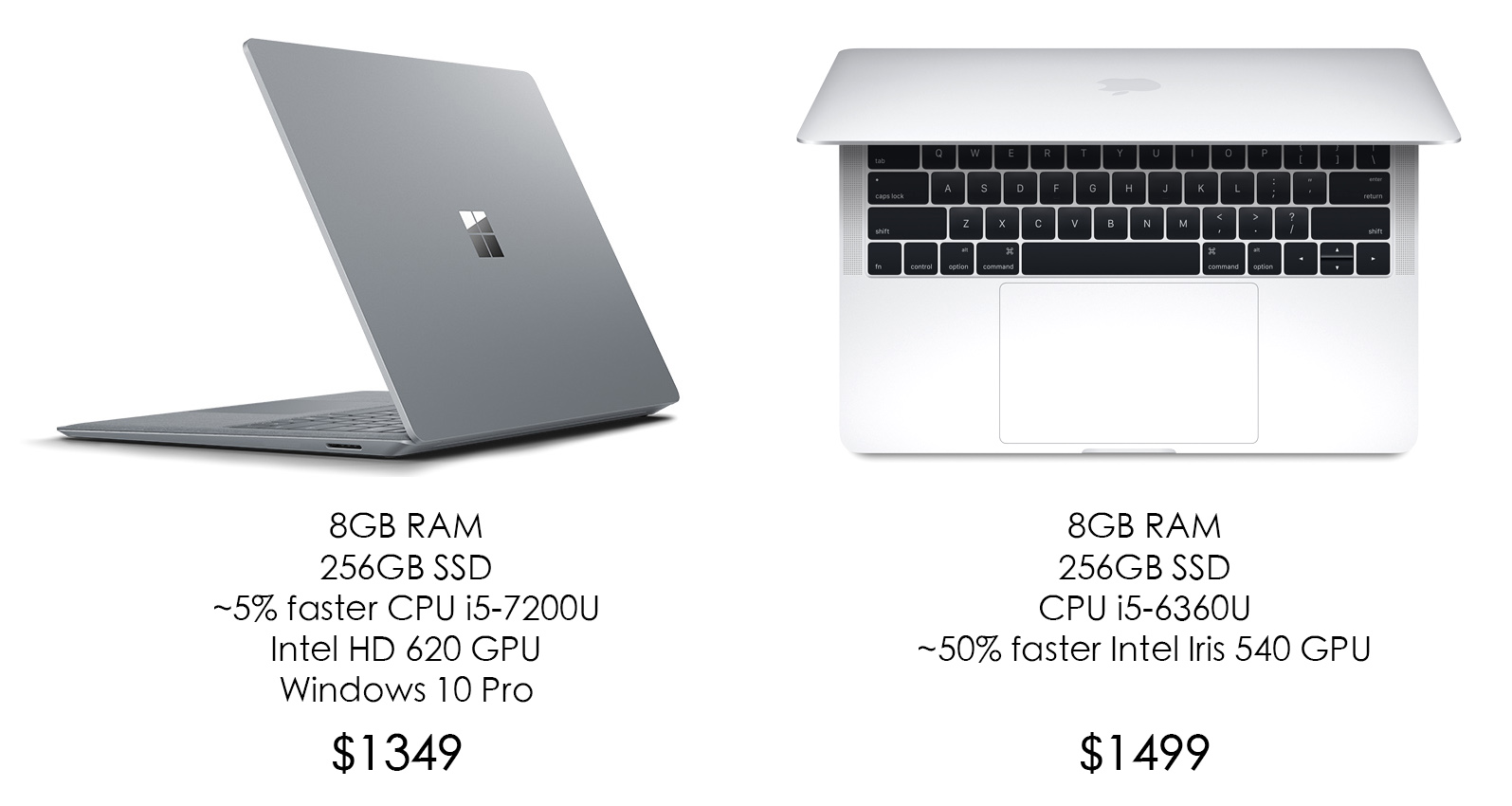